The number one reason people give us for not upgrading to the latest version of WordPress is fear that their plugins won’t be compatible. As part of our continuing efforts to make WordPress core, plugin, and theme upgrades as painless as possible, Michael Adams developed and launched a beta of a new “Compatibility” feature in the plugin directory, powered by your votes. When viewing a plugin in the directory, select a WordPress version and a plugin version from the drop-downs. If there has been feedback about this WordPress / plugin version combination, we’ll show you what percentage of responses marked that combination as compatible vs how many marked it as incompatible. 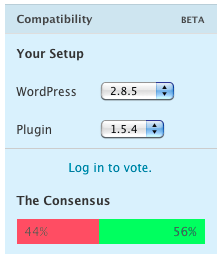 If you log in, you’ll be able to help us gather this information! Just select a WordPress version / plugin version combination and click the “Works” or the “Broken” button. Please note that this shouldn’t be used to report minor issues with a plugin. You should mark a plugin as “Broken” only if its core functionality is truly broken when run on the specified WordPress version. 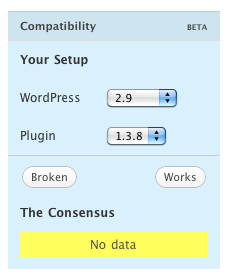 Right now we’re just in information gathering mode. So get out there and vote! Don’t just vote on broken plugins… cast a “Works” vote for every plugin that works on the version of WordPress you are using. This can help improve the signal-to-noise ratio in our data and prevent a few mistaken “Broken” votes from weighing too heavily.

For developers, we’re now including this data in our API. The plugin_information action now returns a “compatibility” member with the multidimensional array format:

Eventually, we’d like to gather this compatibility feedback from within WordPress, allowing you to vote directly from your plugins admin screen. The ultimate goal is to use this information to inform you of plugin incompatibilities with a new version of WordPress during the upgrade process. For that to be useful we need a large set of high quality compatibility data. Start voting!