The poll is closed, the votes are counted, and the results are interesting. The table below shows the actual breakdown of the poll votes, of which there were 2,651. As you can see, there were four main contenders: Dean J. Robinson’s Fluency-based submissions (two variations), the existing 2.7 interface, and Matt Thomas’s comp (MT), which exists somewhere between them in terms of style. Note: GB was a late entry, and was posted after over 900 votes had already been collected. 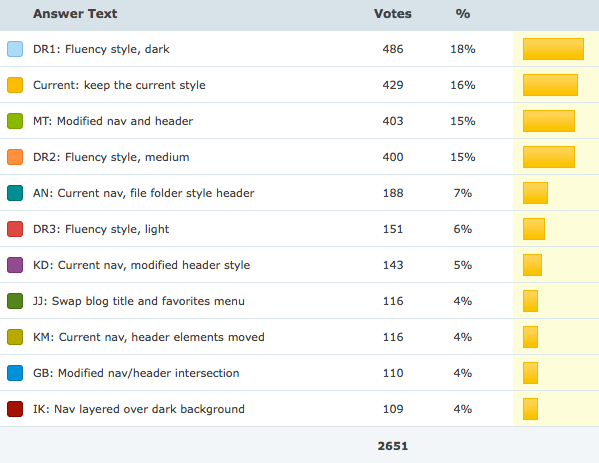 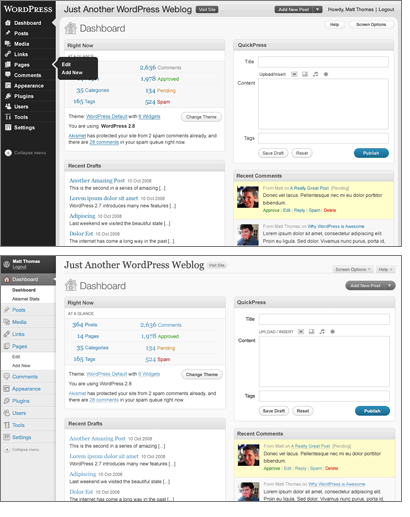 As several people have rightly pointed out, the Fluency-style designs not only took the top spot, but in combination added up to a higher percentage than any other. We’re not focusing solely on that statistic, though, because had other designers submitted multiple versions, the numbers might have looked different. What was most interesting for me was checking in on the votes over the course of the two days the poll was open. The top three (Fluency-dark, Current 2.7, MT) kept beating each other out for the #1 spot as they cycled back and forth through the top three slots, and had the poll closed on time (left it open a little longer in case anyone translated the time zone incorrectly), the order would have been a bit different.

What’s more interesting to me is the overall style that seems to be preferred among voters, as Matt’s comp has some stylistic similarities to Dean’s (see image at left). It also would be interesting to know how many of the votes for the current 2.7 interface were based on thinking it looked the best vs. how many were votes against changing the interface at all so soon after the 2.7 redesign. If you want to comment on what you liked best and/or least about any of the designs, this thread is a good place.

So what happens now? However we look at it, the Fluency-style designs clearly have a lot of fans. Then again, so do the designs of Matt Thomas (he’s behind the current style of 2.7, remember, in addition to the comp labeled MT). To give the interface the attention it is due, and to take seriously some of the interface feedback around usability and accessibility, we’re going to leave the looks alone for 2.8. It’s our guess that a revised style will make into 2.9 early in the development cycle to allow us plenty of time for user testing and revision. How close it winds up being to the comps submitted in this design tweaks challenge will depend, but in the meantime: